The future of the IoT (batteries not required)

Benton Calhoun and David Wentzloff are co-founders of Everactive, the MIT-connected startup using wireless sensing to provide continuous remote monitoring for the industrial internet of things.

When Ben Calhoun and Dave Wentzloff co-founded Everactive in 2012, analysts and tech companies were forecasting a massive increase in the number of internet-connected devices, collectively referred to as the Internet of Things (IoT). IBM, for example, predicted a staggering 1 trillion IoT-connected devices by 2015.

But Calhoun and Wentzloff knew better. The pair, who’d met as graduate students researching ultra-low-power circuits in Anantha Chandrakasan’s research group at MIT, recognized that 1 trillion devices meant the near-impossible task of managing 1 trillion batteries to sustain all of the sensors needed to continuously collect, analyze, and send data.

“Ben and I recognized that there was no way those IoT projections could happen if all of the devices had to run on batteries,” says Wentzloff. “We started Everactive with the collective vision of ridding the IoT world of batteries while ushering in the next era of self-powered computing systems.”

We started Everactive with the collective vision of ridding the IoT world of batteries while ushering in the next era of self-powered computing systems.

Within an industrial environment like a manufacturing plant, there are often thousands of assets that require careful attention to ensure efficient operation. An effective real-time monitoring solution must continuously stream data from each of these points to keep information flowing in a timely fashion so that stakeholders can react quickly to any issues that might interrupt operation, damage equipment, or cause safety risks and environmental harm.

But this is tough to do at scale. Existing solutions that rely on wired sensing are cost-prohibitive to deploy at all of the locations necessary to make them useful. The same is true for battery-powered solutions, especially considering our collective struggle with short battery life.

Now imagine that issue spread across a world where we have 1 trillion IoT devices. Even if we do get to a point where we have an IoT battery with a 10-year lifespan (the current industry goal), we’d be looking at changing more than 270 million batteries every day.

In addition to battery limitations, the scaling issues are compounded by existing wireless networking technology. To effectively address the needs of a manufacturing plant—let alone a 1 trillion-node world—we need extremely high-density sensor networks to communicate at relatively long range throughout environments that are notoriously inhospitable to wireless signals.

Everactive’s innovation solves both of these problems, simultaneously getting rid of the battery and reinventing low-power wireless networking with its differentiating technology: ultra-low-power integrated circuits.

Yes, the same technology Calhoun and Wentzloff researched as graduate students at the Institute. The same field they continued to work on as professors at their undergraduate alma maters, the University of Virginia and the University of Michigan, respectively. In fact, after completing their doctorates at MIT, Calhoun in 2006, Wentzloff in 2007, they maintained close ties and eventually began to cooperate across those university boundaries. 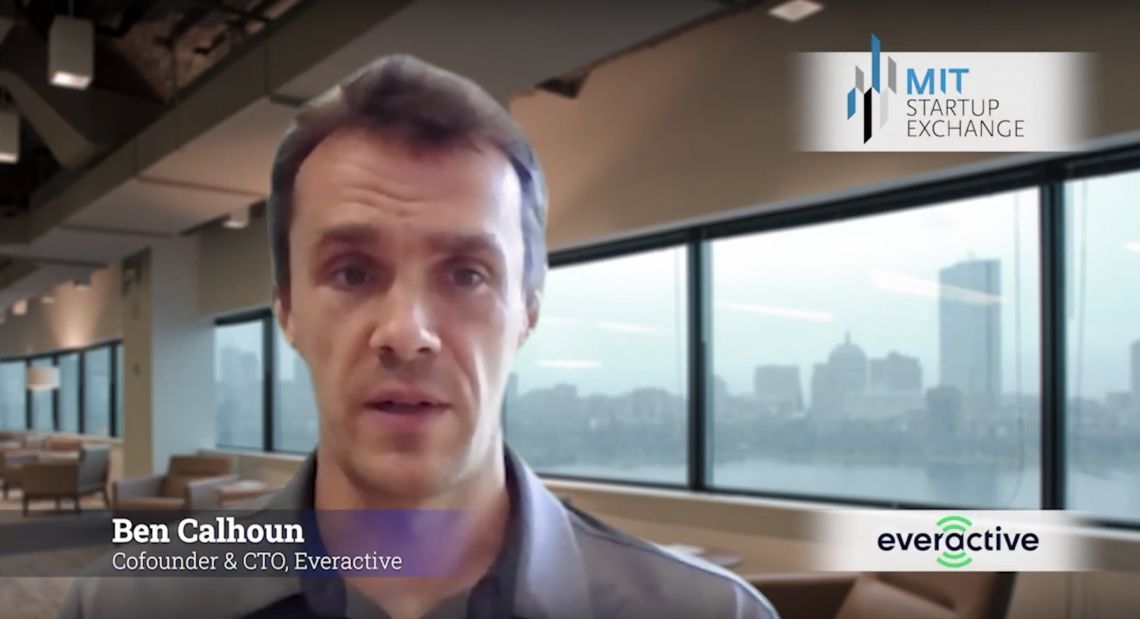 When the two technical co-founders looked to expand their startup, they tapped a collection of their newly minted PhD students that had the expertise of developing wireless system-on-chip technologies in the lab. Today, Everactive has expanded into a team of nearly 90 industry veterans and technical experts, including talented minds like Alice Wang, who joined up with Calhoun and Wentzloff in 2018 after successful stints with industry giants Texas Instruments and MediaTek. Another MIT alum, she now serves as VP of Hardware for Everactive, directing both silicon and hardware systems design.

“We’re exceptionally proud of the team that we’ve developed,” says Wentzloff. “I think a large part of why we continue to succeed is that we’ve done a great job of surrounding our core technology students with a broad set of talented industry leaders.”

Thanks to their advances in ultra-low-power circuits and wireless communication, Everactive sells full-stack industrial IoT solutions powered by their always-on Eversensors, harvesting energy exclusively from the surrounding environment. The sensors can be deployed at a larger scale than battery-powered devices, and they cost less to operate. At the other end of their system, the Evercloud transforms new data into high-value, actionable insights.

Their first product is a steam trap monitor. In a small factory, there might be hundreds of these mechanisms, while large oil and chemical refineries are often home to thousands of them.

Steam may be an old technology, but it’s ubiquitous from an energy standpoint. We still use it in our power plants to generate electricity and it’s a common source of heat for our homes and buildings.

“Steam is a great way to move energy around a large area, which is why it’s still used across so many application verticals and marketing segments,” explains Calhoun. In a steam distribution network, as energy is extracted from the steam it turns back into water. Steam traps function as valves that allow the condensed water to exit the system while keeping the steam inside.

Their failure can lead to wasted energy, costly downtime if the process has to be taken offline, or even dangerous explosions. And monitoring thousands of steam traps for malfunctions is not that simple. “Some steam traps are buried in the ground, and some of them are located two or three stories up,” says Wentzloff. “It can be difficult to reach them. Hence, the manual inspection problem.”

But Everactive’s solution can be deployed on every single steam trap in a steam distribution network for real-time assessment of the state of the system. This is why top industry players like Armstrong International, the second largest steam trap manufacturer globally, has chosen to partner with them. “Armstrong was so impressed with what we have to offer that we’re now working together to bring Everactive's monitoring services to market, in conjunction with Armstrong's excellent steam traps,” says Calhoun.

They saved that customer close to $2.5 million in energy costs and around 34,000 metric tons of CO2.

Successful case studies abound, which is a key factor in their being named to MIT STEX25. Just last year they deployed their sensors in an industrial facility with 1,200 steam traps. They saved that customer close to $2.5 million in energy costs and around 34,000 metric tons of CO2, “which is equivalent to about 7,000 passenger cars per year being taken off the road,” says Wentzloff. They also averted the loss of 60 million gallons of wastewater that would otherwise be leaking through failed traps.

But the industrial space isn’t the beginning and the end for Everactive. Consumer electronics, particularly wearables, is often talked about when discussing the IoT, and it’s very much on Everactive's radar. Logistics is another area they are exploring. By adding localization technology to their next generation of sensors, Everactive could help provide the ability to track assets anywhere across the globe. “There's an unbounded list of industries and applications where we can apply this technology. We're really excited about what's coming ahead,” says Wentzloff.

In the face of the coronavirus pandemic, businesses are revaluating how they operate and how they will function going forward. With workforces reduced, especially in factory settings where Everactive’s clients are building products essential to the economy, it has become even more important to understand what’s going on in places that aren’t easily accessible.

Intent on filling that need, Everactive expects to play an essential role in driving self-powered solutions to make ubiquitous remote monitoring possible. “At Everactive, we believe in a future where all of our environments and assets are monitored and smart, capable of providing information to computing systems to make our world more efficient, safer, and just better for the way we live,” says Calhoun. “We want to be a part of that, and we think our batteryless solution is the right path forward.”