360° Transparency for Construction Sites Made Simple

OpenSpace invented automated 360-degree video jobsite capture and mapping. “It’s not exactly an amazing observation,” says CEO Jeevan Kalanithi, “but a picture really is worth a thousand words.” In the world of real estate development, visual documentation of construction projects is critical. It aids in dispute resolution, prevents mistakes from being compounded, and allows for knowledge capture in case of change-orders. Builders are often contractually obligated to document progress. Usually, this means hiring someone to walk the site and take photos of key areas once a month. These photos are then slapped in a binder or uploaded into a cloud storage service.

But the old way is akin to taking a few snapshots of the Grand Canyon—if the natural wonder was a man-made, built environment—and expecting your audience to grasp the totality of the spectacle. We now have drones, smartphones, and 360-degree cameras. But drones can’t be operated safely indoors, and even with 360-degree cameras, you still have to hire someone dedicated to the task of photographing the site while considering how the files will be properly stored and shared with stakeholders. Updated tech, prettier pictures, same old problems, and new costs. Change orders still lead to chaos, and accountability disputes run rampant.

OpenSpace provides a living tool for managing just about everything on the job site... It changes the way people build by instilling a sense of ground truth, shared facts.

Enter OpenSpace, the Media Lab spinoff propelling the construction of any built environment into the digital age. They’ve updated an essential idea by attaching an off-the-shelf 360-degree camera to a hard hat, and imbued it with cutting-edge computer vision, AI, and data visualization software. Think, the perception and navigation AI systems used in autonomous vehicles.

All you have to do is turn on the camera, tap “go” on the app, and walk the site. It's essentially passive; the OpenSpace Vision System does all the work, mapping site photos to site plans automatically. The complicated part happens under the hood, so to speak, meaning ease of use and streamlined simplicity for the end-user and a comprehensive visual record of the site, with 15-minute processing times, not hours or days, as is the case with some of their competitors.

"OpenSpace provides a living tool for managing just about everything on the job site. It isn't just an archive. Once you have this near-live view of your project, it changes the way people build by instilling a sense of ground truth, shared facts,” says Kalanithi. “And it can be viewed from anywhere. It’s like a time machine meets teleportation device for the job site.” 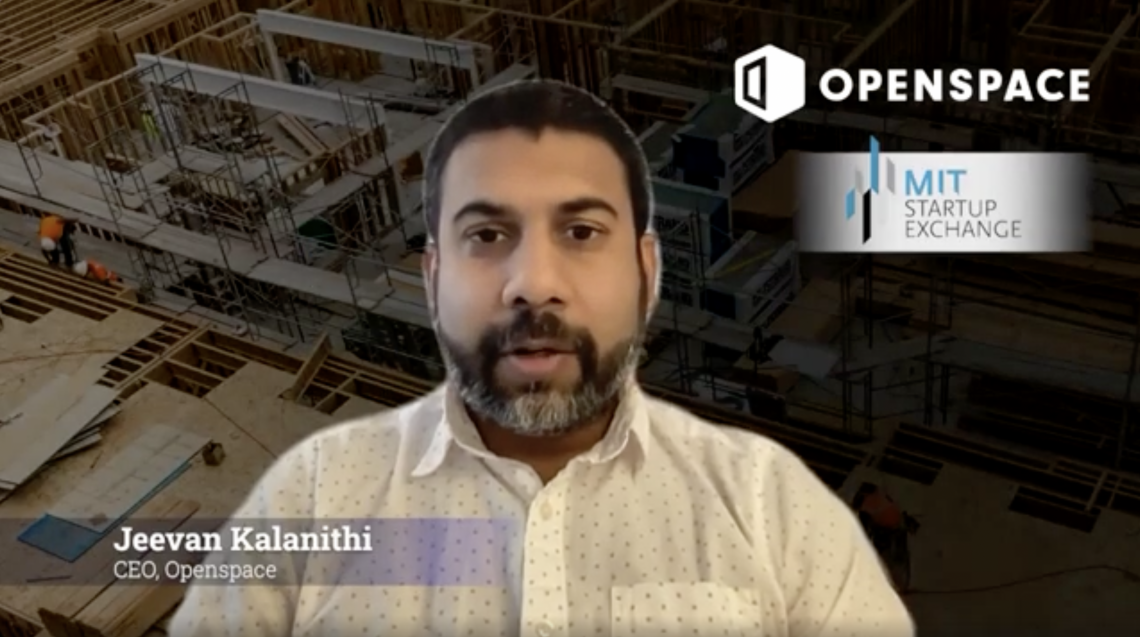 Kalanithi and his co-founders Phil DeCamp and Mike Fleischman met as grad students at the Media Lab. Kalanithi sold his first company, Sifteo, to a drone company called 3D Robotics, where he eventually became the president. Pre-OpenSpace, CTO DeCamp was a computer vision and data visualization research scientist at the Institute. For his part, Fleischman started a data analytics company called Bluefin Labs, based on his research at the Institute, which he eventually sold to Twitter. It was one of the media giant’s largest, and some would argue most meaningful, acquisitions to date.

OpenSpace has raised close to $33 million in funding, with big names like Lux Capital and Menlo Ventures playing vital roles in their growth. While Kalanithi and team are thrilled to sit in on board meetings with people that have been part of companies that have scaled to the billions, they have not forgotten their roots.

"We exist because of the MIT Startup ecosystem," says Kalanithi. "There simply would not be an OpenSpace if it weren't for MIT. It's not trivial to scale any company, especially one like ours that is trying to help a fractured enterprise market lacking a clearinghouse for solutions and technologies for the industry. There's no substitute for the kind of connections that MIT can provide. Being named to the new cohort of STEX25 startups means we now have access to the leading companies that MIT has connections with,” says Kalanithi.

Computer vision allows us to build tools for people that work in real physical reality that you just couldn't before; we’ve crossed a barrier in terms of technological advancement.

Founded in 2017, OpenSpace came out of stealth mode in 2018, and they’re expanding rapidly. It now has thousands of customer projects across 40 countries. From renovations and tenant improvements to stadiums, data centers and hospitals, the computer vision company with an eye for construction has captured over 3 billion square feet of active construction projects, proving the speed and simplicity of its solution while simplifying low trust, high labor, complicated workflows. It's a number that is growing rapidly, and every square foot captured provides data that helps OpenSpace build the future of its analytics products.

Today, it has a suite of products called ClearSight. It's a pioneering new class of AI tools that leverages images to provide unprecedented insight into project status and progression while reversing hundreds of thousands of dollars in change orders and saving millions in overall construction costs by trimming schedules. And thanks to the virtual aspect of the platform, travel budgets get cut significantly. No more trips to the site required when you can see a past-to-present 360-degree view from anywhere.

The fact is that they're solving a tough computer vision problem: "Computer vision allows us to build tools for people that work in real physical reality that you just couldn't before; we’ve crossed a barrier in terms of technological advancement,” says Kalanithi. There are macroscale implications for the innovation. Infrastructure around the world is problematic; it's old and very often falling apart at the seams. As we seek to rebuild our cities, buildings, roads, bridges, we need a new way, and that's just what OpenSpace has on offer.