The new wave of robotic automation

Ask Peter Howard, CEO of Realtime Robotics and MIT Sloan alum, what he thinks is the biggest bottleneck facing the robotics industry, and he’ll tell you without hesitation it’s return on investment. “Robotics automation is capable of handling almost any single task that a human can do, but the ROI is not compelling due to the high cost of deployment and the inability to achieve commensurate throughput,” he says.

But Realtime Robotics has developed a combination of proprietary software and hardware that reduces system deployment time by 70 percent or more, reduces deployment costs by 30 percent or more, and reduces the programming component of building a robotic system in the industrial robot space by upwards of 90 percent. In other words, Realtime Robotics is making robot adoption well worth the investment.

On some level, people are always planning—even the most spontaneous among us. We plan the day: breakfast, work, meeting, lunch, pick up the dry cleaning, etc. On a more intuitive level, that trip from your desk to the coffee machine and back requires many micro-decisions that get you from point A to point B without bumping into anything or anyone. In fact, we don't stop making decisions that allow us to successfully navigate our physical environment until we fall asleep.

In the field of robotics, the computational process of moving a robot from one place to another in the optimal manner without collisions is called motion planning. For thirty years, it has been a thorn in the side of the industry. Because successful motion planning is really about instilling robots with the capabilities (intelligence) to make their own decisions to achieve their goals. To be successful, it has to be done in real-time to accommodate variables that pop up in real-life situations. Furthermore, if a robot is going to work with other robots or people, its movements need to be coordinated with its teammates.

We can look at all the potential options, see moment to moment, millisecond to millisecond, which ones are available, and then find the optimal path through the workspace to get the job done.

But traditional motion planning relies on rigid software that only allows robots to follow absolute motion plans based on a strict decision tree. It's a painstaking process that can take days, weeks, even months of point-by-point programming that must take into consideration all possible options to recommend the best, collision-free path for the robot. The fact is, it's always been too slow to be effective for robot and AV applications in dynamic environments like a factory floor shared by robots and people alike.

Until Realtime Robotics stepped up and solved the problem with autonomous robot motion planning and multi-robot deconfliction. Meaning, they’ve developed a platform including a proprietary processor tailor-made to produce autonomous, collision-free motion plans for multiple robots.

Built on the post-doc research of co-founder George Kanidaris during his time at MIT, the core technology is embodied in an industrial PC called the Realtime Controller. It precomputes a field of thousands, even millions, of potential motions that the robot is likely to need, and then hardware accelerates the searching of those motions at runtime.

"We can look at all the potential options, see moment to moment, millisecond to millisecond, which ones are available, and then find the optimal path through the workspace to get the job done," says Howard. 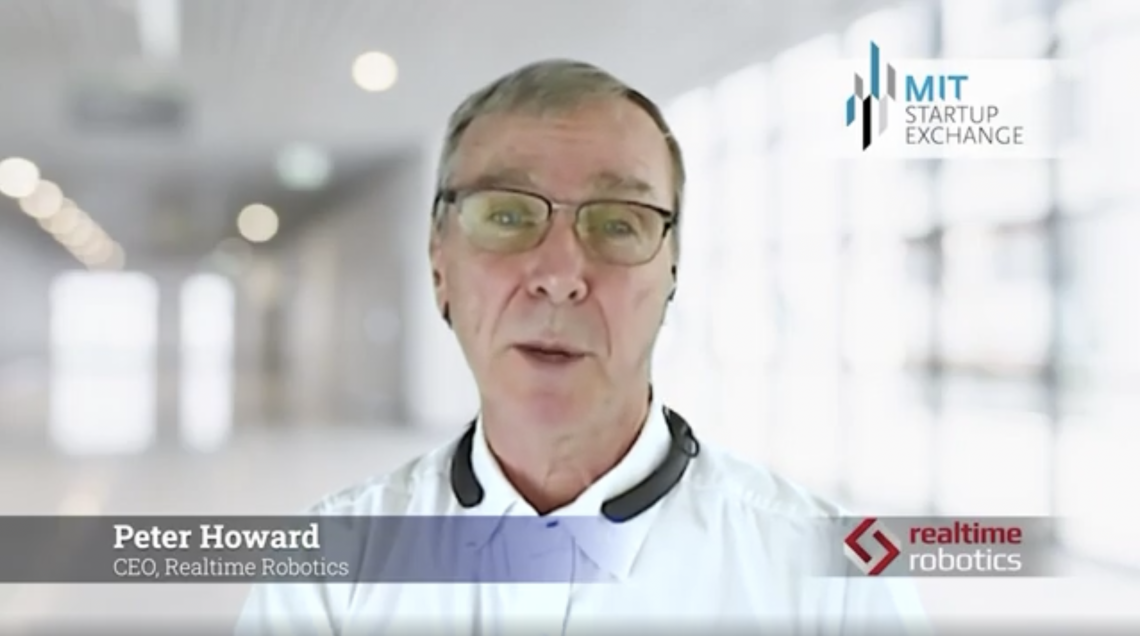 They’ve baked in AI-for-multiple-robot optimization to find the best and highest efficiency for the structure of the work cell—everything from the positioning of the robot to the sequencing of tasks, and which tasks are going to be done by which robot. "In the space of running this AI for just a few hours, you're able to achieve a throughput rate that is unimaginably better than what a human programmer is capable of doing," explains Howard. “Our platform allows new AI-based system makers to stay focused on what they’re good at, while we take care of the difficult underside of the robotics problem.”

The Realtime Robotics platform also incorporates powerful spatial and object perception pipelines that are used for collision avoidance and workpiece perception, providing unprecedented flexibility while keeping human co-workers safe. “We’re putting on the market the first system that is capable of interacting intimately with people and keeping them safe in the presence of industrial robots,” says Howard.

We’re putting on the market the first system that is capable of interacting intimately with people and keeping them safe in the presence of industrial robots.

In May of 2017, Realtime Robotics set up shop at MassRobotics. Three months later they had completed their first seed round of funding and landed their first contract with Amazon Robotics. A year later, they had demonstrated their first killer demo for an audience that included two of the top six robot makers.

Howard says their strong ties to MIT played no small role in helping garner attention. “MIT ILP and the Startup Exchange have a very strong relationship at MassRobotics and throughout the Boston robotics ecosystem—they were continuously bringing world leaders in the robotics industry through the facility."

With Howard guiding the decision-making processes for Realtime Robotics, the go-to-market strategy is to reach end users by collaborating with leading industrial OEMs as non-exclusive partners. Most recently, they've teamed up with Siemens Digital Industries software division to help manufacturers reduce the time to deploy and adapt to changes during simulation and on the shop floor.

As for use cases, Howard points to Realtime Robotics’ recent work with Toyota. After working through the first three phases of a multi-phase project, he says they are now entering the exciting process of going out on the factory floor with the automotive manufacturer. To date, they are controlling a multi-robot cell with four robots on the production line. But it won’t be long before this expands to more applications and facilities across North America.

And it’s not just the factory floor where Realtime Robotics expects to have an impact. Autonomous vehicles will benefit tremendously from risk-aware motion planning. Realtime Robotics' dedicated technology, known as Lightning, can run through hundreds of potential forecasts per sensor cycle. It gives AV stack partners the ability to imagine a world of possibilities and their various probabilities as identified by Realtime Robotics' sensors and AI-powered perception stack to calculate the best immediate motion plan that ensures safety in anticipation of those possibilities.

Realtime Robotics currently has global automation OEM leaders promoting their products and top ten automakers doing the first product rollouts while incorporating the game-changing technology in their own standard tools and workflows. “With breakthrough new capabilities for optimization and safety being added to our platform, as well as tanking up a little bit on the fundraising side, the next six months are going to be a very exciting time,” says Howard.