Lael Odhner is cofounder and CTO of RightHand Robotics, the Somerville-based robotics company streamlining fulfillment and logistics with automation.

“The problem with picking is, at its core, tied to geography,” says Lael Odhner. Odhner is cofounder and CTO of RightHand Robotics, the Somerville-based startup at the forefront of the new e-commerce automation revolution. Modern day fulfillment and distribution centers are massive structures, spanning up to one million square feet. And while there are a multitude of reasons why these centers have found a home in places like rural Ohio and the Chinese countryside, the low cost of real estate in these areas sits high on top of that list. If you’re looking to save money building a warehouse the size of multiple football fields, choosing a location where real estate is cheap would seem to make sense.

However, staffing these new mega-warehouses is proving difficult. According to Odhner, it’s very much a case of demand outstripping the supply of labor in sparsely populated areas (or even densely populated urban areas, as Amazon’s recent trend of erecting specialty fulfillment centers in city centers proves). “One of the great dilemmas for retailers running fulfillment centers is that they have work that people would rather do, and they have work that is still necessary despite the fact that no one wants to do it,” says Odhner. Very often, that work is unskilled labor like picking and placing.

The geography problem, combined with double-digit, if uneven, industry growth rates, is resulting in significant pressure on digital retailers to keep their fulfillment centers staffed so products get to consumers on time. “One of the ways retailers can reduce turnover among employees is by automating hard-to-fill positions,” says Odhner. “That’s really where we’re starting, basic pick-and-place tasks. We believe that robotic picking offers a solution that has the potential to make everybody happier.”

Odhner earned his SB, SM, and ScD in robotics and mechanical engineering from MIT. “I came to MIT back in 1999, and I stayed as long as I could. I loved it,” he says. At the Institute, he developed a fascination with the human hand. Specifically, he became interested in “how to produce artificial muscles dense enough to articulate something as complicated as the human hand,” with its 27 independently moving bones.

After graduation, Odhner spent five years at Yale University, working with future RightHand co-founders Leif Jentoft and Yaro Tenzer to develop high-performance, low-cost robot hands for DARPA. Despite exceeding DARPA expectations, Odhner, Jentoft, and Tenzer were interested in pursuing other avenues for their new-found technological breakthrough. “We realized pretty quickly that the real applications for our technology were not military in nature,” he says. In 2012, the team entered their robotic grasping technology in the MIT $100K Entrepreneurship Competition, making it to the semifinals of the products and services division.

That same year, Amazon acquired Kiva Systems and its fleet of robots for $775 million.
Founded in 2003 by industry pioneer and MIT alum Mick Mountz, Kiva Systems’ key innovation involved portable storage units and mobile robots dedicated to moving inventory around fulfillment centers as needed for human pickers and placers. Mountz has been credited with creating the market for robotics in e-commerce—by 2025, the global warehouse robotics market is projected to hit $6 billion—and his sale of Kiva to Amazon left a technology gap in the market while pointing the way for roboticists and internet retailers alike. 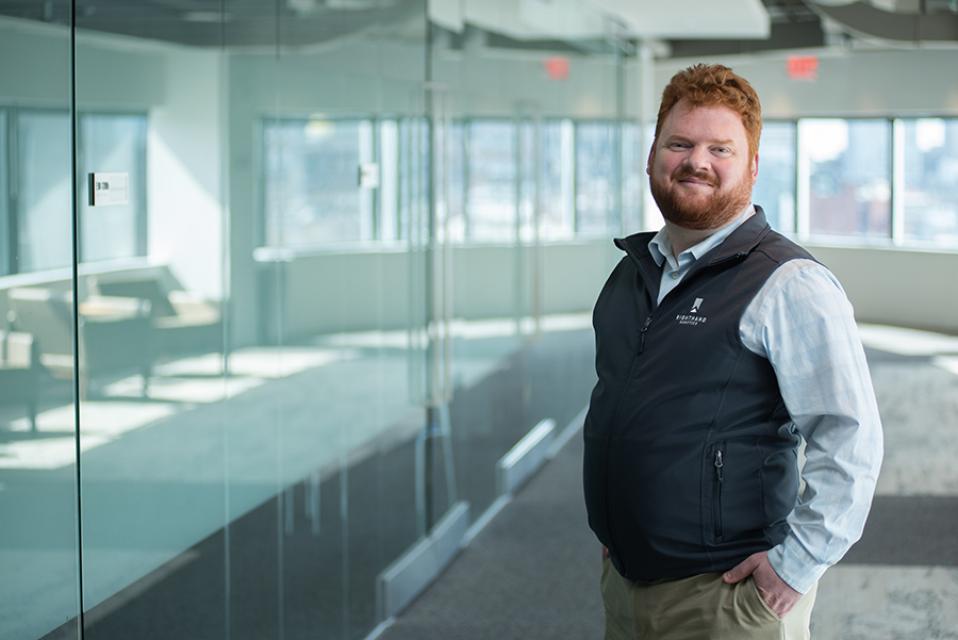 Their semifinal berth in the MIT $100K competition caught the attention of several large retailers and robotics companies, as well as piquing the interest of Mick Mountz and former Kiva Systems CTO and MIT alum Pete Wurman. “Mick offered great advice about focusing our efforts on a company dedicated to grasping and manipulating everyday objects in the context of e-commerce order fulfillment,” says Odhner.

Today, Mountz sits on the board of directors for RightHand. “RightHand is picking up where we left off [with Kiva Systems],” says Mountz. “Customers saw products coming directly to operators for picking and packing and would ask: ‘Why don’t you also automate this step with a robotic arm and gripper?’ RightHand has, in fact, developed that solution—mastering the critical performance requirements of real-world distribution center environments.”

2018 saw RightHand close their series B round of investment of $23 million led by Menlo Ventures. GV (formerly Google Ventures) also got in on the act, as did Dream Incubator, Matrix Partners, and Playground Global. “It’s very exciting, says Odhner. “We now have the resources to really scale up this technology. We’ve just announced RightPick2, the second major version of our integrated picking system.”

The system Odhner refers to is a grasping appliance (robot arm) replete with customizable end effectors (including suction and fingers) to grasp and manipulate objects. They’ve also designed a complementary machine vision system capable of imaging containers of arriving goods. This integration of software and hardware provides the end-to-end piece-picking solution the e-commerce industry has been waiting for. “We’re seeing a big competitive advantage due to our ability to handle a wide variety of objects with a single robot,” says Odhner.

RightHand is currently engaged with a number of large US retailers and third-party logistics companies interested in designing the fulfillment centers of the future. They’ve also found traction abroad, for example, with PALTAC CORPORATION, a large Japanese pharmaceutical distributor with extremely precise cosmetic standards for their packages. “We’re looking for customers with the largest volume of retail goods we can find,” says Odhner. “We’re interested in companies trying to tackle their own problems with fulfillment or piece-level distribution. Our goal is to handle and distribute the stuff of the world.” 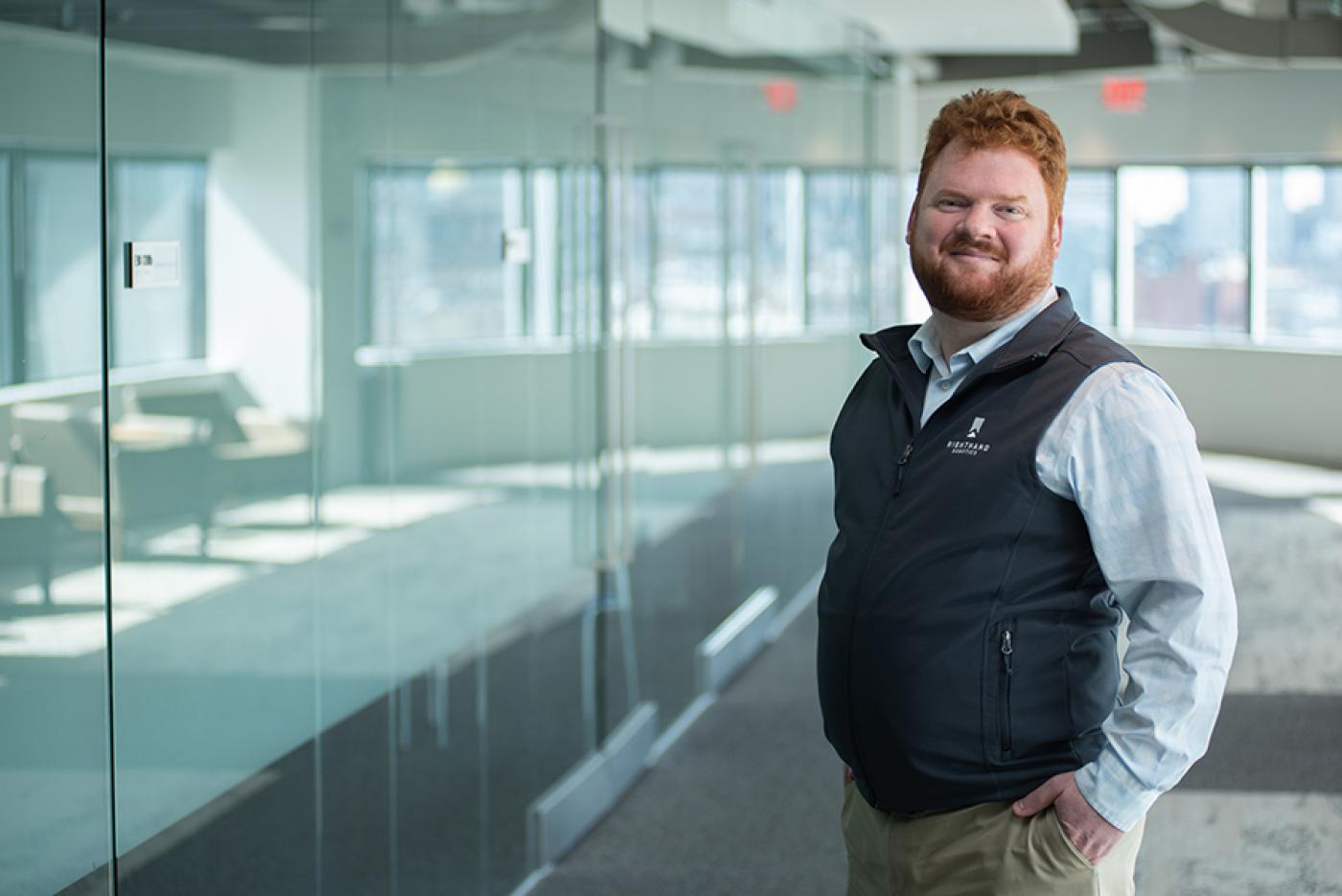