The prospect of becoming environmentally sustainable draws a usual reaction: Good idea but not feasible – products can’t be made quickly or efficiently enough to improve the bottom line. Sweetwater Energy is looking to change that. The Rochester, New York company has developed a technology that can break down biomass in under 20 seconds and the resulting materials can replace petroleum in a slew of everyday items, says Jack Baron, Sweetwater’s president.

The speed is one benefit, but the work can also be done at a large scale and improve product cost and performance across many applications. Clearing that long-standing economic hurdle has been significant. “We’ve definitely proven that the commercial scale system does what it is supposed to do,” says Arunas Chesonis, Sweetwater’s chief executive officer. Now it is about deployment. The company’s recently commissioned European project is one step. The next is looking for global partners to help spread the platform to as many places as possible, so the ability to make anything with sustainable biomass, from fuels and chemicals to packaging, computers and cars, no longer has to involve a self-imposed green tax.

How the barrel was formed

Chesonis studied civil and environmental engineering at MIT. After graduating in 1984, he moved to Rochester, started working in telecommunications and met Baron, a University of Rochester biochemist, and fellow business and engineering executive. They started companies together, but they eventually decided to take what they had learned over three decades and apply it to sustainability. “It was thinking about how to make the planet better for our kids. People didn’t need another telecom company,” Chesonis says. “But if you’re going to replace fossil fuels, you need new technologies that are less expensive than fossil fuels.”

It was thinking about how to make the planet better for our kids. People didn’t need another telecom company.

Sweetwater Energy was founded in 2009. Baron was the original CEO. Chesonis was the first, big angel investor and came aboard in 2011. The initial focus was on fuels and chemicals from non-food sugars sourced from crop residues, but the focus shifted over time to extracting maximum value from the biomass from trees, cornstalks and wheat straw. The company worked on modifying and perfecting its technology, and, by the fourth iteration, Sunburst came about.

Chesonis says that the platform ended up being something highly powerful and yet fairly simple. He explains it like this: It’s a 14 foot long barrel containing a gear box, motor, and, the key element, a twin-screw extruder. In 20 seconds, over 90 percent of the material is broken down; steamed and treated with a dilute acid; and, at the end, a proprietary element creates an explosion, “something akin to a popcorn maker,” to help further break down the material, he says.

The result produces specialty cellulose, sugars and lignins. Two of those aren’t everyday terms, but, as Baron says, they’re all building blocks “for products that we use everyday,” such as fuels, paints, sneakers, adhesives, cosmetics, pretty much anything that has a petroleum base.

The equipment isn’t novel, but what sets Sunburst apart is that its processing of biomass is complete, fast and cost-effective. It had to be that way, they say, in order to economically compete with low-cost petroleum. Business owners might want to be sustainable, but not if it will increase their expenses. Baron says that’s always been the sticking point, so, as Chesonis adds, from the beginning, Sweetwater’s goal was that its technology would provide customers and suppliers with a 10-25 percent cost reduction.

They are confident that they can now deliver that savings, but there’s also been a focus on improving how the end-products perform, and the results are positive. One client added specialty cellulose into its packaging, and the decreased weight meant lower final product and shipping costs. In Japan, nanofibrillated cellulose is being used in the body of an electric car and it’s been shown to have fives times the strength of steel at one-half the weight. The same result of higher strength/lower weight has been seen when it’s been added to cement. In all, the cellulose effect for customers has been to “lightweight their products,” says Baron says, adding that the possibilities for building, military and automotive applications remain “far and wide”. 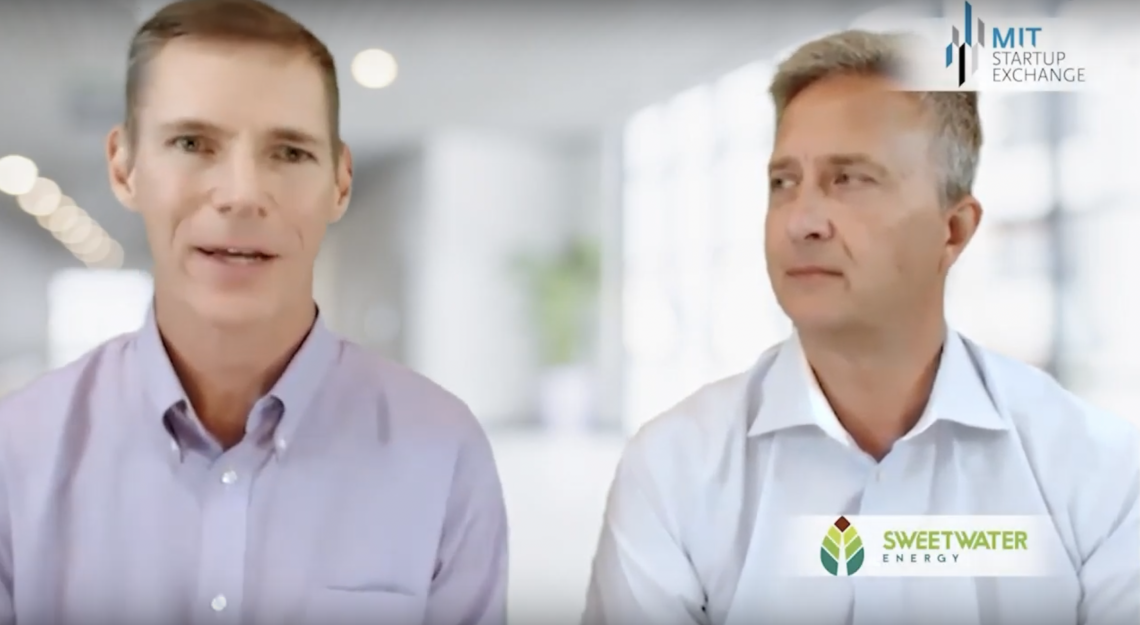 It’s one thing to develop a pilot technology. It’s another to bring that out of the proverbial lab and get it to market. Chesonis and Baron are particularly excited about the opening of the demonstration plant with their partners in Estonia. The ability to operate and produce to commercial levels has been another needed element for viability, and another one that hasn’t been in place with competing technologies, but the Sweetwater-based plant has shown that Sunburst can be reliable, scalable and can work globally.

It also gives industries time to figure out how they can shift and incorporate the platform. For large companies, changing infrastructures isn’t a quick process. It’s along the lines of 5-10 years, but, “The planet and the rest of us don’t have that much time,” Chesonis say. Sweetwater is looking for partners; the ideal ones are medium-sized companies that have the shortest path to commercialization. Those will be able to utilize Sweetwater’s technology as a “drop-in” ingredient and not have to disrupt their operations too much, he says.

Our mission really is to ensure that this technology is prevalent throughout every country.

That will help Sunburst spread, but Sweetwater has other plans to speed the process. “Our mission really is to ensure that this technology is prevalent throughout every country,” Chesonis says. It wants to build a commercial plant in the United States, and it wants additional partners to collaborate with. It actually needs those, because it can’t be a solo venture. There isn’t enough time, and, “We’d never be able to get large enough,” Baron says.

But Chesonis adds that Sunburst’s small footprint becomes an advantage. It can easily fit into an existing manufacturing facility’s floor plan and it will allow the company to leverage the hundreds of available paper mills and chemical and bioplastic facilities and “grow with our customers.” It’ll end up being a combination of efforts, they say: Sweetwater-owned-and- operated facilities, joint ventures with existing organizations, and licensing out the technology.

It all ties back to the basic component of efficiency. It was the starting point for the company and it remains the motivation. The petroleum industry has been effective at extracting maximum value from oil for decades. Baron says that Sweetwater wants to do the same for sustainability by trying to get every nickel out of a piece of wood or ounce of crop. “That’s the whole barrel approach,” he says.