As COVID-19 cases and deaths continue to rise, pharmaceutical companies have been working to bring a vaccine to market, an act of balancing speed, efficacy and safety. A necessary priority throughout has been manufacturing the eventual drug, but just as essential to any rollout is the delivery of the drug. It’s not just getting it to billions of people, but it’s the actual administration of the vaccine. It’s a component that is sometimes overlooked, but it’s been the focus of Vaxess.

The Cambridge, Massachusetts company has developed a novel material that allows therapeutics to be given through a self-applied patch that doesn’t require refrigeration, so they can be delivered around the world without worry of expiration. The simplicity is important, but the technology’s definition is that the kinetics of release can be modulated and can trigger and incorporate the body’s immune response. The coronavirus is Vaxess’s main concern, but it’s not the only one. The company is working on range of platforms from cancer treatment to birth control, all with a similar end result: The protection is longer-lasting, more complete, and requires only one dose that can be good for weeks or months at a time. “It’s not just simplifying delivery. It’s really radically altering the quality and efficacy of protection for these vaccines and other therapies,” says Michael Schrader, CEO and co-founder of Vaxess.

It’s not just simplifying delivery. It’s really radically altering the quality and efficacy of protection for these vaccines and other therapies.

The paper that set off the material

Schrader and three Harvard graduate school classmates started Vaxess in 2012. They had the material and the help of two Tufts University professors as they tinkered with the formulation. In 2014, they caught a “lucky break” when they found a paper by MIT professors Darrell Irvine and Paula Hammond that used the material for drug delivery. Vaxess decided to work with them, then brought the technology in-house, and eventually started collaborating with the MIT Engine in 2019 to help drive the product into the clinic.

The platform comes in the form of a patch – Schrader says to think of it like the one for nicotine – which needs to sit on the skin for only five minutes, forgoing injections into muscles that are immunologically inactive. Since it doesn’t require refrigeration, treatments can be shipped by something like Amazon to essentially any location. The stability, along with the easy application, allows therapeutics to go directly into people’s homes, Schrader says.

But ease of distribution isn’t the main benefit. It’s the material’s capabilities. As Schrader explains, it was developed by an immunologist so that a vaccine would be introduced and mimic the infection. The Mimix technology can be tuned, releasing a drug on a schedule, rather than all at once. The body’s immune response gets activated, and, as antibodies grow in both quantity and quality, the vaccine can respond to drifted strains long after the dosage was given, broadening the protection and “fundamentally altering the therapeutic benefits,” Schrader says. 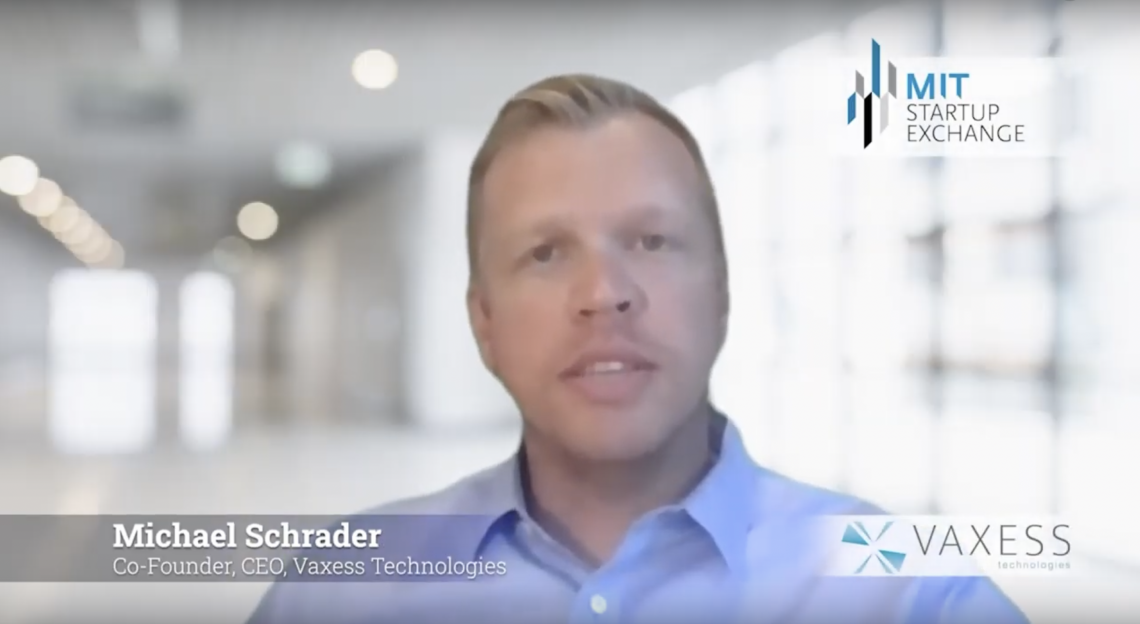 Being in position to respond

Because of the pandemic, Vaxess’s focus has been on making a combination vaccine for COVID and influenza. The company could have never predicted that this would be its work when it started, or even in 2019, but it had the flexibility to respond since it’s not a drug maker. It partners with those. For the vaccines, they’re Medigen and GC Pharma, and Schrader says that the intent is that it will be one dose that could last up to two years. It’s in pre-clinical development with the hope of clinical trials in 2021. Schrader says that he’s encouraged, but he understands the work that’s needed still needed, most especially manufacturing on a worldwide scale, and, “We’ve never had to produce a vaccine at those levels before.”

We’ve never had to produce a vaccine at those levels before.

The need is pressing, but Schrader says that Vaxess isn’t rushing to be the first to market. He sees COVID turning into an endemic and he would like the company to become the “seasonal standard”. What that entails, he says, will become clearer in three-five years, but he can predict the benefits of Mimix. With a world population of seven billion – predicted to be eight in 2023 – the difference between giving a single dose of a vaccine versus two-three, as some others would require, becomes even more significant in terms of eliminating the “logistical nightmares” that can hamper an effective treatment getting to the people who need it when they need it.

The platform is open

The COVID/influenza platform is a main focus, but Schrader says that this is fundamentally a delivery system. The company is already working on a cancer treatment, and again the same technology is in play. A five-minute dose with a tunable release would go into the skin, stimulating an immune response and impacting the tumor micro-environment. Schrader says that other possibilities include birth control, electrolytes, pain medicine, and epinephrine. Essentially, any medication delivered by a needle and syringe could be replaced with the patch, and the company is always open to drug manufacturers that are looking to partner.

That prospect might be daunting. Re-imagining drug delivery, and seeing the value in it, has always been tough for drug companies, Schrader says. And since it’s new, the Mimix platform would most likely require a company to make manufacturing changes for an already existing product. Vaxess’s team can help the transition and provide feedback, but the integration is not trivial, he says.

Schrader adds that he remains positive on the upside for adopting Vaxess’s technology. Doctors and nurses wouldn’t necessarily have to be on demand to administer a drug. Patients would not have to go into a clinic to receive treatment. The product could get to more locations and people, all the while being more effective through stimulating the immune system to help the body fight, be it against a flu, virus or tumor. “It’s a uniquely transformative opportunity,” he says.