A new type of biotechnology company

The cost of DNA sequencing has plummeted at a rate faster than Moore’s Law, opening large markets in the sequencing space. Genomics for cancer care alone is predicted to hit $23 billion by 2025, but sample preparation costs for sequencing have stagnated, causing a significant bottleneck in the space.

Conventional sample preparation, converting DNA from a saliva sample, for example, into something that can be fed to a sequencing machine, relies on a liquid-handling robot. It is essentially a mechanical arm equipped with pipette tips that moves liquid samples to plastic plates and other instruments placed on the deck. These systems involve multiple fluidic transfers that lead to poor utilization of reagents and samples, which means less DNA sequenced. Moreover, they are systems of separate data silos that lack integration and rely on expensive consumables.

Unlike traditional liquid handling automation, the Volta Labs suite of solutions provides end-to-end integration for a wide variety of workflows. It’s a sleek alternative to costly liquid handling machines and manual pipetting. “Our technology is a small-scale, benchtop device that is low-cost and has minimal consumable usage, enabling rapid and flexible composition of new biological workflows,” says Volta Labs co-founder and Head of Engineering Will Langford.

Our technology is a small-scale, benchtop device that is low-cost and has minimal consumable usage, enabling rapid and flexible composition of new biological workflows.

The Volta platform is based on digital microfluidic technology developed at MIT by Langford's co-founder, CEO of Volta Labs, Udayan Umapathi. The core principle behind the innovation is called electrowetting. It allows its users to manipulate droplets around a printed circuit board to perform biological reactions, automating from raw sample to prepared library that can be run on a sequencing machine.

Umapathi arrived at the Media Lab with what he describes as "a fascination for building automation from the ground up." Though trained as an engineer, Volta's CEO has applied his skills to a variety of fields. In 2015, he founded a startup that created web and physical tools to enable content creation for digital manufacturing. However, it was while working for a synthetic biology company, engineering liquid handling systems for genome engineering solutions, that he identified the scaling up of automation as a pain point for the field.

Meanwhile, Langford spent his MIT days at the Center for Bits and Atoms, a proudly interdisciplinary program that explores the boundary between computer science and physical science. His research centered on the idea that engineering could learn from biology. Put another way, all of life is assembled from 20 amino acids, so, thought Langford, why not attempt something similar with engineering? 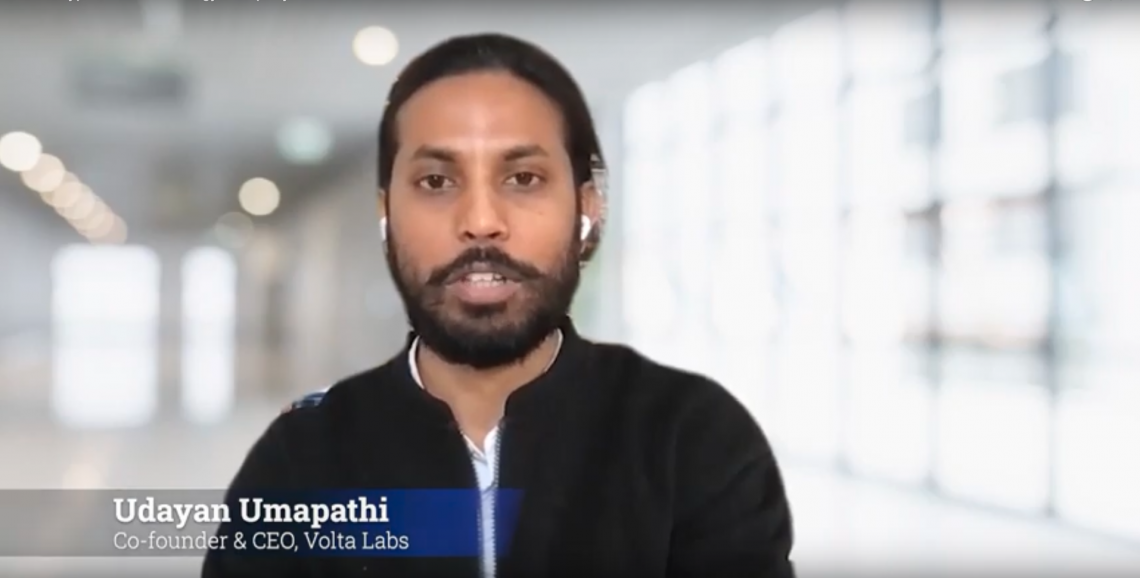 In practice, this meant he built integrated robots from a small set of millimeter-scale parts. "Ultimately, I was trying to make engineering more like biology,” he reflects. “I see Volta as an opportunity to flip that on its head and use automation to treat biology more like engineering. We want to give biologists tools to manipulate liquids and biological reactions at a finer granularity and with more digital flexibility.”

While Volta’s automation platform simplifies sample prep by integrating complicated workflows, it also drives down costs in the space with a new consumable construction. Between the circuit board and the sample board is a consumable layer, which is removed and replaced after each run. Conventional consumables are expensive, conductively coded plastics or large microfluidic structures. Volta, however, uses a simple plastic film to reduce the cost of consumables, which opens the door for the widespread adoption of gene sequencing.

We want to give biologists tools to manipulate liquids and biological reactions at a finer granularity and with more digital flexibility.

All of this points to a more efficient and inclusionary model in the gene sequencing space. Thanks to Volta, soon, it won't be just large biotechnology companies with the ability to invest in automation. Academic labs, core facilities, and small-to-medium biotech companies won’t need to worry about whether they can afford an expensive mechanical robot. "The thing that excites me is that we’re providing early-stage and mid-to-low-throughput biotech companies with powerful tools that will allow them to compete with bigger players, which is good for the industry as a whole,” says Umapathi.

And the fact is that traditional automation machines used in the biotechnology space come with their own set of problems. They're error-prone and you can't scale them. Consider Illumina's NovaSeq sequencer. It's capable of sequencing 48 whole human genomes in under two days—that’s 20 billion unique reads—but there is currently no automation to feed those machines at scale. “To run those machines day in and day out, the cost simply doesn’t make sense, which is why we have to tackle the cost of sequencing and sample prep,” says Umapathi.

Volta's system is built on solid-state electronics, and the Boston-based startup is looking to leverage the scalability of the semiconductor fabrication industry and the PCB manufacturing industry. “The goal,” explains Langford, “is to enable biologists to create an experiment and modify it quickly, iterate on it, and generate the data necessary to see biology at scale.”

Beyond the sample prep bottleneck, eventually, the work of Umapathi and Langfordwork will impact a variety of applications in the synthetic biology industry and the biopharma industry. Diagnostics will be transformed according to Umapathi. “We can help the biology industry by cutting down on the use of pipette tips by 20 or 50 times. In specific workflows, we can almost entirely eliminate this bottleneck in the supply chain," he says.

To accomplish all of this, to truly innovate in a field as complex as biology, Umapathi and Langford insist that a multi-disciplinary systems perspective is essential. It’s what informs the Volta approach to genomic sequencing in particular and biology as a whole. “Volta is a new type of biotechnology company,” says Umapathi. “It’s inevitable that more engineers and systems thinkers and those who want to build tools to engineer biology better will join companies like ours or start their own.” Turning biology into an engineering principle is no small feat, but according to Umapathi and Langford, it’s a necessity.